When it comes to using oilfield equipment to extract oil and natural gas, the two methods most commonly used are hydraulic fracking and horizontal drilling. Up until recently, horizontal drilling has been the main method used for retrieving the earth’s natural energy resources. However, in recent years, the fracking process has started to take over the scene. In today’s blog here at Northern Oilfield Services, we go over the basics of drilling, the basics of fracking, and the main differences.

Looking to buy or rent oilfield equipment for your wellhead? Contact our team at Northern Oilfield Services today to get your wellhead services started!

Drilling for oil is both exactly what it sounds like and significantly more complex than you might think all at the same time. It all starts as you might have imagined — with the drilling of a hole deep into the earth. After the drilling, though, is where the process becomes more complex.

The drilling process is similar to that of a handheld drill creating a hole in wood or drywall, but with a few key differences. For one, the oilfield equipment used for drilling is significantly larger than that of a handheld drill. And, oilfield equipment involves using something called mud. Mud is used to keep the drill cooler, lubricated, and to help bring rock fragments and other materials to the surface.

Then, once the drill has reached the desired depth and reached the oil and natural gas reservoir, the casing process begins. In order to maintain the structural integrity of the well, it is lined in cement. Cement helps to prevent the well from collapsing and can help deal with high pressure.

After the casing is done, the well needs to be prepared for production. This is done by creating small holes with oilfield equipment in the casing. The holes are strategically placed directly where the casing meets the oil and natural gas reserve. This allows the oil to flow through the casing. In many cases, there is enough pressure inside the reserve to push the oil up to the surface on its own. But there are situations where a pump or other oilfield equipment is necessary to extract the oil from the reservoir and bring it to the surface.

At the end of a well’s life, it does not dry up as many people believe. Wellheads are actually abandoned when the amount of oil being produced from the well is no longer enough to sustain the cost of operating the well. At this point is when the wellhead is abandoned. The well is then filled with cement, all the oilfield equipment removed, and then sometimes buried to leave the site as close as possible to how it was found. 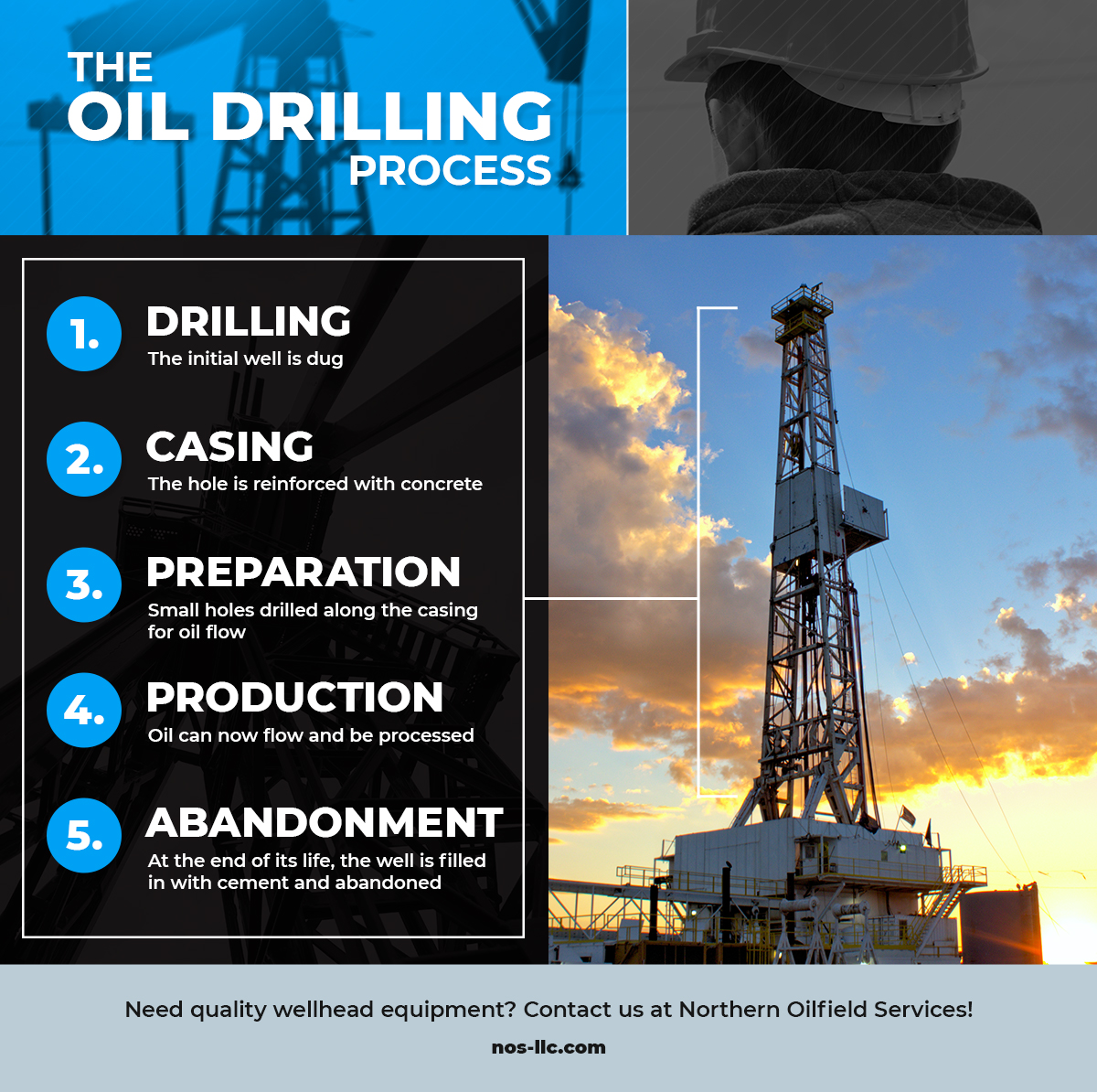 You may also hear the term “horizontal drilling” when referring to drilling in the oilfield. This process is essentially the same as described above, but instead of drilling straight down, the well is drilled at an angle. This is done when the oil reserve is inaccessible from above in situations where there are residences, buildings, or other important structures above the reservoir.

The fracking process is actually very similar to the traditional oil drilling process, but with a few key differences.

Both traditional oil extraction and fracking begin the same — by digging a deep hole down into the earth with oilfield equipment. But, next is where the two processes start to differ. Once the drilling has reached the desired depth where the oil and natural gas are, in the fracking process, you begin to turn your drilling efforts and drill horizontally so that you are drilling parallel to the ground.

The fracking process also has a casing step, but instead of cement alone, the casing is done with both cement and steel. This is due to the high pressures associated with fracking oilfield equipment.

At this point, fracking fluid is pumped in at incredibly high pressure. Fracking fluid, for those who don’t know, is most commonly a mixture of water, sand, and a few different potent chemical mixtures. This is done because there are pockets and cracks within the shale that contain oil and natural gas that typically cannot be collected, but are accessible if the cracks and pockets are expanded — which is exactly what the fracking fluid does. The fracking fluid opens up these hard-to-reach pockets of resources and enables them to be extracted. The fracking process tends to yield much more oil and natural gas than a traditional well.

Next in the fracking process, the high-pressure will cause the fracking fluid to return to the surface where it will be collected. Once the fracking fluid is gone, though, the pockets it created need to be propped open in order to collect the oil and natural gas resources previously trapped inside. This is done through a series of materials called proppants. Proppants need to be extremely tough to stand up to the pressures of the reservoir pockets collapsing under the immense pressure.

At this point, the oil and natural gas are able to flow freely from the well to be collected and later processed. After about 20–40 years, once the resources from the well start to slow down and the wellhead is no longer profitable, the same abandonment process as drilling occurs. The well will be sealed and all the oilfield equipment removed. 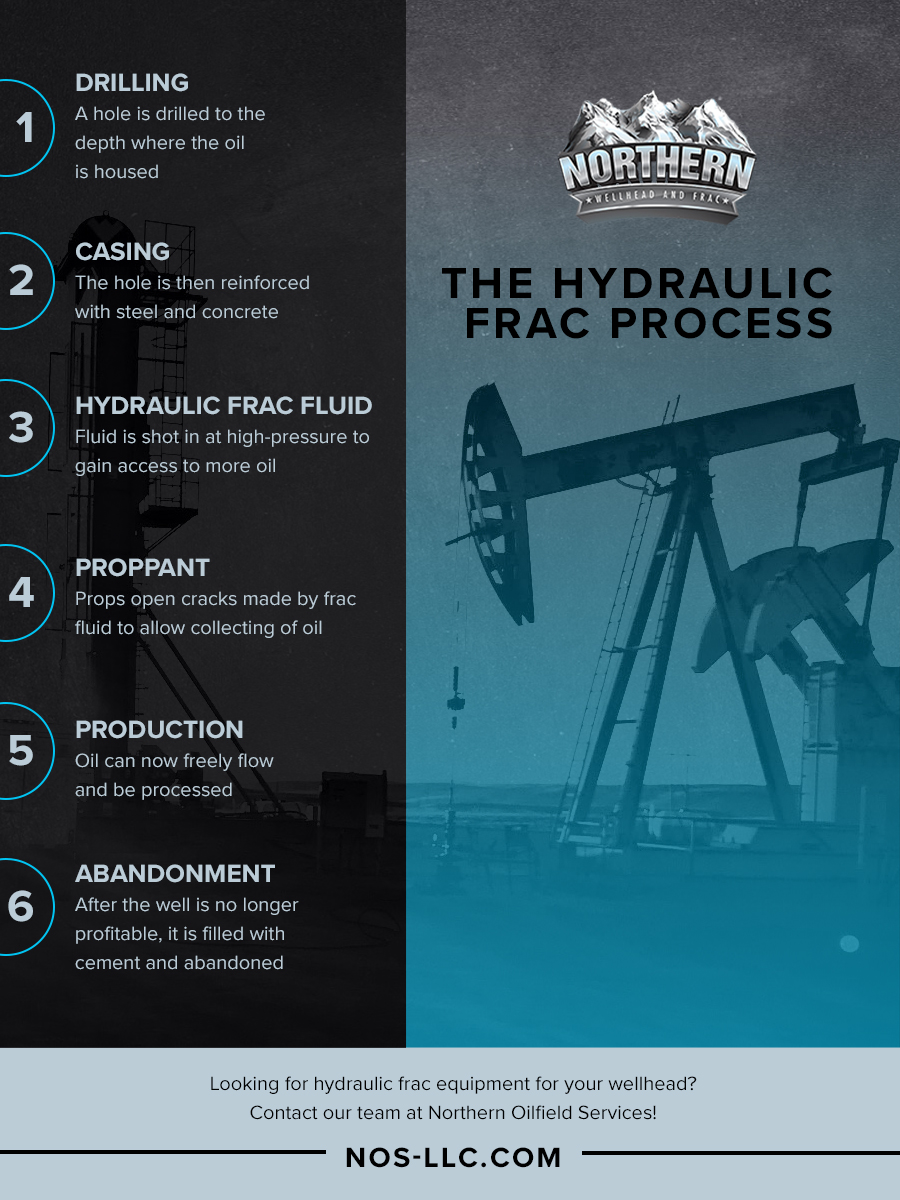 The main differences between the drilling process and the fracking process come from the techniques used. Fracking uses fracking fluid to further expand the pockets of shale to enable the extraction of more oil and natural gas resources, while drilling simply pulls from the oil and natural gas readily available in the reservoir. In recent years, there has been some controversy over the safety of fracking and whether only drilling should be allowed, but in most cases, it shows the only dangers from fracking come from irresponsible wellhead practices.

Here at Northern Oilfield Services, we pride ourselves on providing excellent wellhead services and helping companies obtain some of the highest-caliber oilfield equipment on the market. We both rent and sell our oilfield equipment to suit your business’ needs, and will happily provide regular maintenance, repairs, and code regulation upkeep to keep your wellhead running at peak performance! Learn more about Northern Oilfield Services and how we can help you by contacting us today!